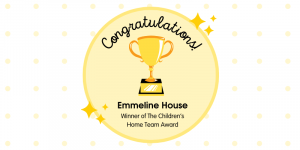 This award is presented to the team who are able to best demonstrate a shared vision and agreed roles. The award recognises Emmeline House’s excellent communication and commitment to child-centred care, as well as the outstanding leadership of the home’s management team.

The team were nominated in August. After nominations for the award were whittled down to finalists from all the entries across England, Scotland and Wales, it was announced that Emmeline House were in the final 11! The team then had to attend an interview, where they were informed they would be attending a spectacular award gala.

The Emmeline team attended the award ceremony last Thursday, coming away as proud WINNERS of this award!

Upon receiving the award, the judges said: “Teyte Parrish and Anne Pinner demonstrated an immense commitment and enthusiasm for making a difference to the lives of the young people they support a genuine example of Great British care and worthy winners of this award.”

A huge congratulations to the team at Emmeline House – this award is an amazing achievement, and we’re so pleased to see our colleagues getting the recognition they deserve!

Everyone at Compass is so proud of the team and would like to thank them for the incredible work they do.